Our only agenda is to publish the truth so you can be an informed participant in democracy.
We need your help.
More Info
A voter registration table is seen at a political event for Texas gubernatorial candidate Beto O'Rourke, Wednesday, Aug. 17, 2022, in Fredericksburg, Texas. (AP)
Comparing the number of voting-age residents in a state or county to the number of registered voters in that state or county often lacks important context and gives a misleading impression.
The National Voter Registration Act prevents election officials from removing people from voter rolls too quickly — even when they have reason to believe that a person has moved away. Those voters are classified as “inactive voters” while they remain on the rolls in accordance with federal law.
Even if the total of active, pending and inactive voters outnumber eligible voters in some counties and states, that is not proof that ineligible voters are voting.
A video on Instagram suggests that “good old fashioned, home-grown voter fraud” is persistent in the U.S. and one bit of proof is the size of the nation’s voter rolls.
“Is voter fraud real?” read the title of the video, produced by PragerU and narrated by Eric Eggers, a conservative journalist and author of a book claiming Democrats plan to steal elections.
“In 244 counties across the United States, there are more registered voters than there are people legally eligible to vote,” Eggers says in the video. “Twenty-nine states have counties with more registered voters than legal residents. And eight states have more registered voters than actual voting-age people.”
The narrator concludes that these figures prove that “it’s very easy to exploit our voting system.”
PolitiFact was unable to independently verify the numbers shared by PragerU. However, some voter data analyses over the years have found that a fraction of the nation’s counties have had more voters listed on county-level voter rolls than the number of people who are eligible to vote. But experts say that fact alone lacks context and does not signal widespread fraud.
This post was flagged as part of Facebook’s efforts to combat false news and misinformation on its News Feed. (Read more about our partnership with Meta, which owns Facebook and Instagram.)
We reached out to PragerU for more information about the claim and didn’t get a response.
Here’s what we know.
The video cites as a source a July 2019 Real Clear Politics article. It read: “Eight states, as well as the District of Columbia, have total voter registration tallies exceeding 100%, and in total, 38 states have counties where voter registration rates exceed 100%.”
Real Clear Politics didn’t cite a source for its figures. But the figures have been often repeated — we found similar numbers in an August 2019 press release from Public Interest Legal Foundation, a conservative group run by J. Christian Adams, who was part of former President Donald Trump’s short-lived voting integrity commission.
Public Interest Legal Foundation has spread election misinformation in the past.
Jennifer Morrell, partner at ​​The Elections Group, an organization that consults on election administration, said the possibility of registered voters outnumbering eligible voters in some counties and states is not proof that ineligible voters are casting ballots.
“Voter fraud pertains to the act of voting and not the act of registering to vote or the adequacy of maintaining voter rolls,” Morrell said.
For broader context, there are 3,143 counties in the U.S., meaning that 244 accounts for about 7.8% of all of the nation’s counties. A Kaiser Family Foundation analysis of states’ voter data from November 2020 showed that 168 million people were registered nationally — 72.7% of the eligible voting age population — while actual voter turnout was a record 66.8%. So, nationally, there are far fewer people who are voting than are registered to vote. And the portion of people who are registered is much smaller than those who are eligible.
Federal law prevents election officials from removing people from voter rolls too hastily, even if they’ve moved and are no longer eligible to vote in a certain area.
For that reason, experts cautioned against drawing conclusions based on data that compares the estimated number of voting-age residents in a state or county to the number of registered voters.
“In most states, when an election office receives notification that a voter has moved, that voter’s record is changed to ‘inactive’ status,” Morrell said. If voters who have moved do not communicate with their former election officials, the National Voter Registration Act requires that those voters remain in a state’s voter registration database for two federal election cycles before being removed.
The Public Interest Legal Foundation finding did not say whether it parsed the data to look only at active voters. Without that information, it’s hard to know what to make of a statement like this, Morrell said.
In 2017, Judicial Watch used data from the U.S. Census Bureau and the Election Assistance Commission to similarly claim that many counties in the U.S. had more registered voters than eligible voters. Several news outlets, however, reported that such claims relied on the inclusion of inactive voters.
“If in fact the totals being reported are all active registered voters, which I’m doubtful is the case, that is more an indication of inattention to list maintenance practices, or state laws that are outdated and make voter list cleanup slower,” Morrell said. 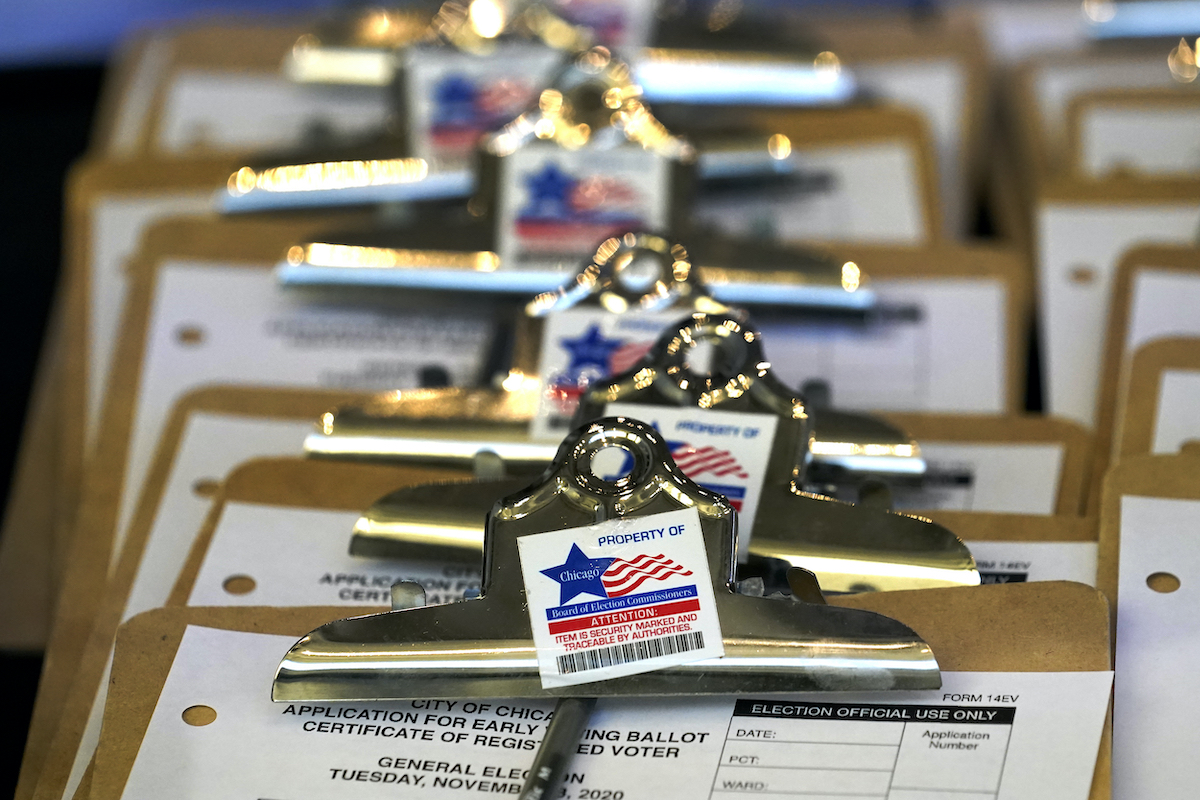 Clipboards with voter registration forms sit on a table on Election Day, Tuesday, Nov. 3, 2020, at the United Center sports complex, a new super voting site in Chicago. (AP)
Charles Stewart, a professor of political science at MIT, explained that the National Voter Registration Act prohibits states from removing people from voter rolls “purely for not voting.”
That 1993 law established rules for when election officials can remove people from voter rolls if they have not asked to be removed. It requires states to have a uniform and non-discriminatory process for removing people from the voter rolls, according to the Justice Department.
The National Voter Registration Act allows states to remove someone from the voter rolls at that person’s request and to remove people for things such as criminal convictions, if state law permits it. Additionally, the law requires that states have a “general voter registration list maintenance program” that makes a “reasonable effort” to remove people from the voter rolls if they have died or relocated in a way that makes them ineligible to vote in that region.
Before someone is removed because of a believed change of residence, election officials typically must notify that person in writing that they are at risk of being taken off the rolls, Stewart said. Candidates for removal from voter rolls are designated “inactive” voters. If inactive voters show up to vote during the two federal election cycle window or communicate with the elections office, their registration status can be shifted back to “active.”
That isn’t common, however.
“A very small percentage of inactive voters end up voting,” Stewart said. “A high fraction, probably around 80%, are eventually removed.”
That means people who moved to a different county or state might appear on voter rolls twice — once with an active voter registration that allows the voters to cast a ballot in their new area, and once as inactive voters where those voters used to live.
There also is no requirement for voters to inform their former election officials that they’ve left, Stewart said, so “it’s virtually guaranteed” that registration rolls will contain some people who are no longer eligible voters who live in that region.
Still, Stewart said: “There is no evidence of widespread double voting in the U.S.”
A video on Instagram claimed that it’s a sign of fraud that “in 244 counties across the United States, there are more registered voters than there are people legally eligible to vote.”
We were not able to verify these figures, but some analyses of county-level data over the years have found cases in which voter rolls appeared to include more people than are eligible. But that fact alone does not signal fraud, experts said. It was also not always clear whether those analyses looked only at active voters. And even if the figures have merit, they represent less than 8% of the counties in the U.S., where national voter data show far fewer people vote than are eligible.
It’s more likely these lengthy rolls reflect voter roll maintenance issues, experts said. The National Voter Registration Act prevents election officials from removing people from voter rolls too quickly — even when they have reason to believe that a person has moved away. Those voters are classified as “inactive voters” while they remain on the rolls, following federal law.
We rate this claim False.
RELATED: All our fact-checks about elections.
Instagram post, Nov. 1, 2022
Real Clear Politics, Who will clean up America's voter rolls? July 13, 2019
Email interview with Charles Stewart, professor of political science at MIT, Nov. 3, 2022
Email interview with Tammy Patrick, Elections senior advisor for Democracy Fund, Nov. 4, 2022
Email interview with Jennifer Morrell, partner at ​​The Elections Group, Nov. 4, 2022
Email exchange with David Becker, executive director of the Center for Election Innovation & Research, Nov. 3, 2022
USA Today, Fact check: Michigan townships had more registered voters than votes, Dec. 31, 2020
PolitiFact, Dead voters on Detroit’s voter rolls, including person born in 1823? That post is outdated, Nov. 5, 2020
PolitiFact, No, there weren’t more votes than registered voters in the 2020 election, March 1, 2021
PolitiFact, Anti-vote fraud group levels false charge of corrupted voter rolls, Oct. 4, 2027
PolitiFact, Fact-checking the misleading claim about uncounted ballots in 2020, Sept. 14, 2021
Public Interest Legal Foundation, 244 counties have more registered voters than live adults, Aug. 19, 2019
Public Interest Legal Foundation, County list 2019, accessed Nov. 4, 2022
The New York Times, A popular political site made a sharp right turn. What steered it? Nov. 17, 2020
PolitiFact, In Ohio, GOP candidate falsely says more votes than registered voters in 2020 election, April 4, 2022
Justice Department, The National Voter Registration Act of 1993, accessed Nov. 8, 2022
National Conference of State Legislatures, Voter registration list maintenance, Nov. 8, 2022
U.S. Census Bureau, Over two-thirds of the nation’s counties had natural decrease in 2021, March 24, 2022
Kaiser Family Foundation, Number of voters and voter registration as a share of the voter population, accessed Nov. 9, 2022
Snopes, Does the U.S. have millions more registered voters than eligible adults? April 9, 2018
The San Diego Union-Tribune, Fact check: Do 11 California counties have more voters than eligible adults? Aug. 9, 2017
The Principles of the Truth-O-Meter
In a world of wild talk and fake news, help us stand up for the facts.
Sign me up
District of Columbia
1800 I Street NW
Washington, DC 20006
Florida
801 3rd St. S
St. Petersburg, FL 33701
727-821-9494