The realities of Biden's plan to admit 100,000 Ukrainians to the US – PolitiFact

Our only agenda is to publish the truth so you can be an informed participant in democracy.
We need your help.
More Info
Ukrainians wait near the U.S. border on April 4, 2022, in Tijuana, Mexico. (AP)
President Joe Biden’s announcement that the U.S. would welcome up to 100,000 Ukrainians lacked a timeline. Experts say it won’t happen fast.
The White House said they will be admitted through the U.S. refugee program and other legal pathways.
Refugee resettlement agencies get funding from the federal government. As former President Donald Trump lowered refugee admissions caps, funding for those agencies diminished — and so did their capabilities to help people arriving as refugees.
More than 4 million people have fled Ukraine since Russia’s invasion began late February. With bordering countries Poland, Romania and Hungary overwhelmed with Ukrainians looking for safety, President Joe Biden announced on March 24 that the U.S. would also welcome Ukrainians.
While many refugees would prefer to stay closer to home in Europe, Biden said, the U.S. "will welcome 100,000 Ukrainians to the United States with a focus on reuniting families."
The 100,000 people will be let in "through the full range of legal pathways," the White House said, and the U.S. is "working to expand and develop new programs" with a focus on Ukrainians who already have family in the United States.
But a lot about the plan remains uncertain. The White House did not provide specifics on a timeline for admissions, nor did it respond to PolitiFact’s request for additional information about the nature of the admissions.
One thing is clear: Experts say it will take more time to admit 100,000 Ukrainians than many might hope or expect. 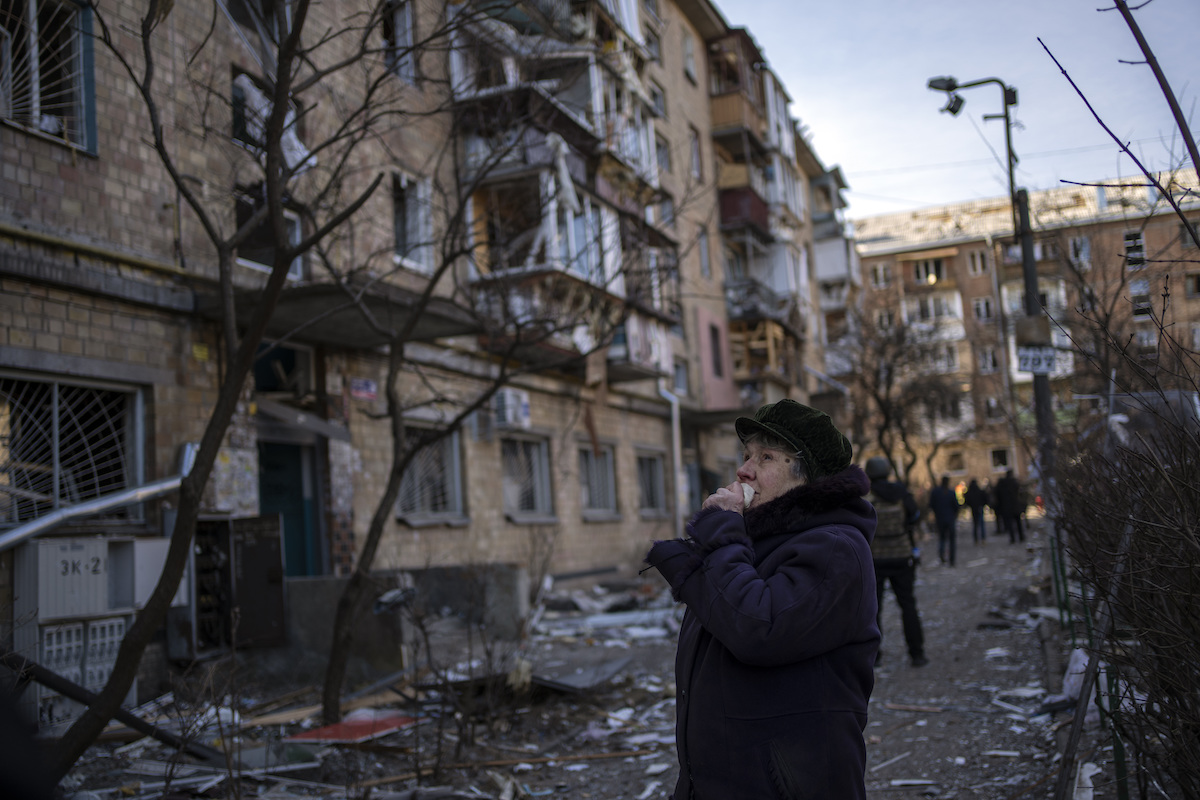 A woman looks at residential buildings damaged by a bomb in Kyiv, Ukraine, on March 18, 2022. (AP)
While not all Ukrainians will be admitted under a refugee status, it’s worth noting that in recent years, the U.S. has admitted far fewer refugees than federal policy has allowed.
Former President Donald Trump was vocal about his disdain for increased immigration, and he repeatedly reduced the maximum number of refugees that would be allowed into the country.
By the time he left office, Trump had set the lowest refugee admissions cap in the program’s history.
Biden campaigned for the White House promising the opposite — to increase refugee admissions. Just a few months into his administration, Biden announced an aspirational goal and raised the low fiscal year 2021 cap set by Trump from 15,000 to 62,500 refugees.
At the same time, Biden acknowledged a "sad truth" — in reality, the U.S. would not be able to admit that many refugees.
He was right; in fiscal 2021, the U.S. admitted 11,411 refugees, according to State Department data. (The federal fiscal year starts Oct. 1 and ends Sept. 30.)
Arriving in the U.S. as a refugee is not as straightforward as some might think, even if that person comes from a war-torn country.
Under federal law, to apply for admission as a refugee, people must be outside the U.S. and must demonstrate to a U.S. immigration official overseas that they were persecuted or fear persecution in their home country due to race, religion, nationality, political opinion or membership in a particular social group. People admitted into the U.S. as refugees arrive here legally and must have passed background checks and other security screenings.

!function(e,i,n,s){var t=”InfogramEmbeds”,d=e.getElementsByTagName(“script”)[0];if(window[t]&&window[t].initialized)window[t].process&&window[t].process();else if(!e.getElementById(n)){var o=e.createElement(“script”);o.async=1,o.id=n,o.src=”https://e.infogram.com/js/dist/embed-loader-min.js”,d.parentNode.insertBefore(o,d)}}(document,0,”infogram-async”);
For fiscal year 2022, Biden set a goal of admitting up to 125,000 refugees. That’s unlikely to happen at the current pace. So far, six months into the fiscal year, just 8,758 refugees have been admitted.
The U.S. has admitted 704 Ukrainian refugees; the majority of them — 427 — arrived in February. Only 12 Ukrainian refugees were admitted in March.
Trump’s dramatic cuts limited the country’s ability to resettle refugees.
The State Department works with the United Nations to identify refugees and arrange for their travel. Once refugees are in the U.S., resettlement agencies help them start new lives in their new communities. Those agencies rely on grants from the federal government, and the size of those grants is based on the expected number of refugees, said Theresa Cardinal Brown, managing director of immigration and cross-border policy for the Bipartisan Policy Center. 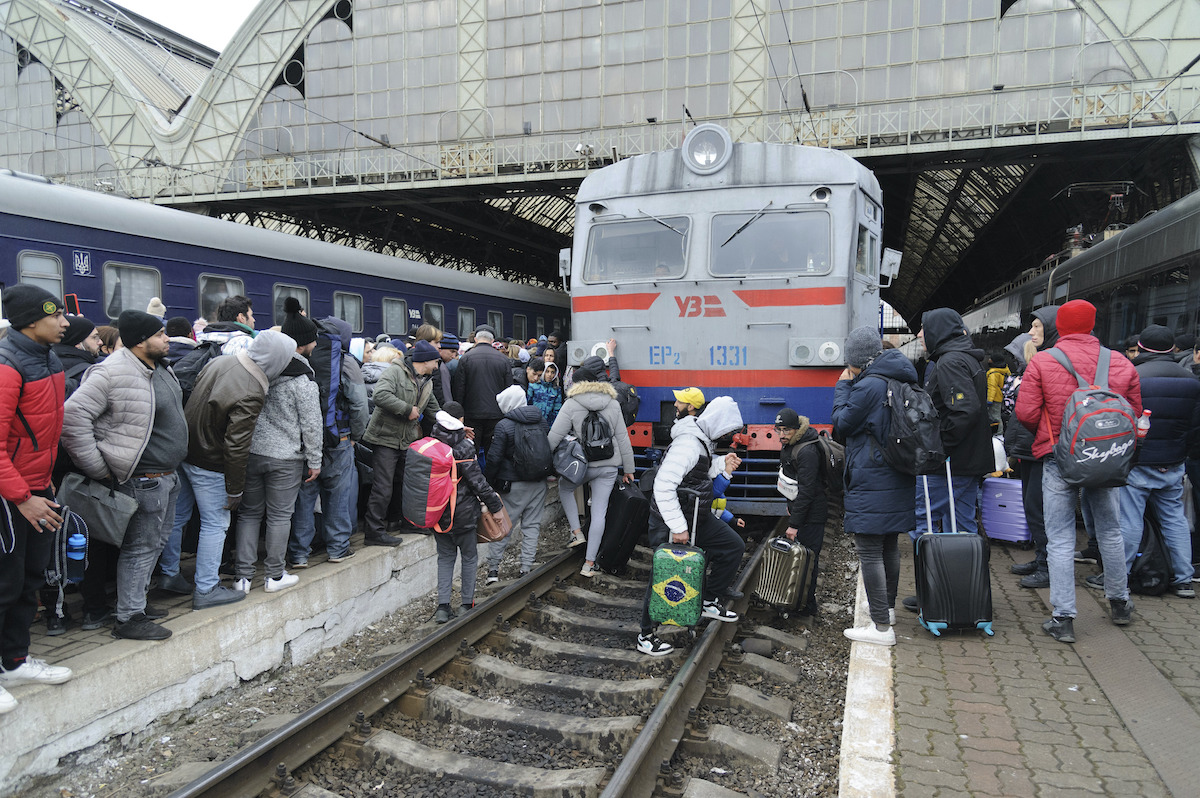 People gather to catch a train and leave Ukraine for neighboring countries at the railway station in Lviv, Ukraine, on Feb. 26, 2022. (AP)
In recent years, resettlement agencies lost substantial funding and had to "drastically cut back their size," Brown said.
Krish O’Mara Vignarajah is the president and CEO of Lutheran Immigration and Refugee Service. She said her organization closed 17 offices nationwide during the Trump administration.
Vignarajah said that since Biden increased the refugee ceiling, more funding has become available for resettlement agencies. Her organization has added or reopened about a dozen offices.
The COVID-19 pandemic has complicated resettlement efforts, too.
U.S. government employees often interview refugees face-to-face, and the pandemic has made travel difficult for those employees, said Julia Gelatt, a senior policy analyst at the Migration Policy Institute.
Experts said it will be challenging and unlikely for the U.S. to admit 100,000 Ukrainians quickly.
Some Ukrainians will come in under the refugee program, the White House said. But it typically takes two years or longer for someone to come in as a refugee once they start that process.
"The only way for this system to provide immediate relief is if the administration finds ways to accelerate the timeline," Vignarajah said. If that cannot be done, she said the U.S. could use a "nimbler option," known as humanitarian parole.
Under humanitarian parole, people who may otherwise be ineligible for admission into the United States are allowed in for a temporary period. Parolees can apply for a work permit.
More than 70,000 Afghan evacuees arrived under humanitarian parole in fiscal year 2021. They were among more than 82,000 people the U.S. flew out of Afghanistan as U.S. forces withdrew from the country. (The 82,000 also included U.S. citizens and lawful permanent residents, refugees, and people with "special immigrant visas" who helped the U.S. in Afghanistan.)
While the same option could be used to admit Ukrainians, Gelatt said humanitarian parole would put those people "into an uncertain legal status without any direct path to permanent residence in the United States." 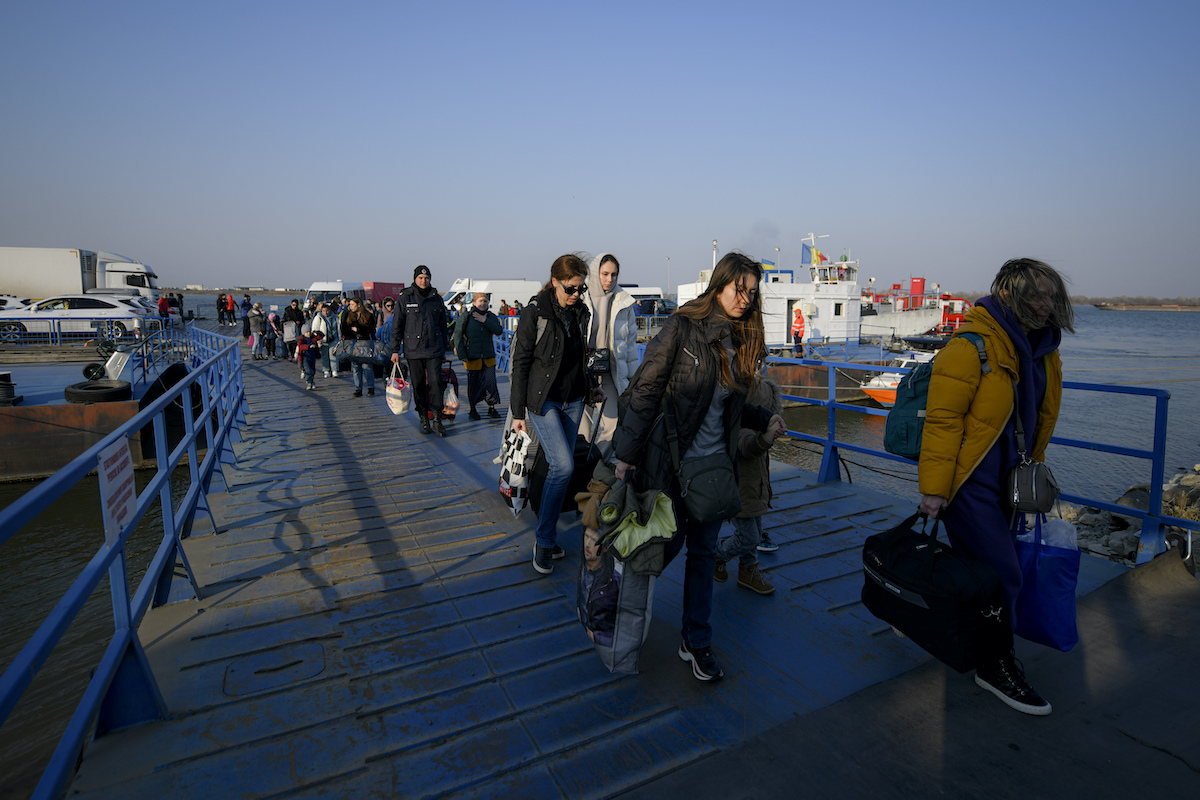 People fleeing the war from neighboring Ukraine walk after crossing the border by ferry at the Isaccea-Orlivka border crossing in Romania on March 24, 2022. (AP)
Brown of the Bipartisan Policy Center said the Biden administration might also consider prioritizing Ukrainians who qualify for employment visas.
"Within the country generally, we have the capacity — we have the room, we have the people who want to help," Brown said. "One of the advantages is that there’s a lot of support for the Ukrainian refugees."
The U.S. in late March designated Ukraine for Temporary Protected Status for 18 months; TPS beneficiaries are protected from deportation and can apply for work permits.
In addition, the U.S. may, on a case-by-case basis, use other ways to bring in Ukrainians, such as expediting requests for parole or applications for work permits, waiving fees and being flexible about missed interviews and replacing lost or damaged immigration documents.
Some elected officials and immigrant advocates have said that while it’s important for the United States to grant immigration protections to Ukrainians, the same should be done for people from other countries, without exceptions or double standards.
"We really need to make sure that when we talk about accepting refugees that we are meaning it for everybody no matter where you come from," Rep. Alexandria Ocasio-Cortez, D-N.Y., told MSNBC’s Rachel Maddow. Ocasio-Cortez said the way the U.S. has treated Haitians and others seeking refuge at the southern border "is not right."

"How the world treats Ukraine, and Ukrainian refugees, should be how we are treating all refugees in the United States," Rep. Ocasio-Cortez says. pic.twitter.com/bxzbRIYDju