All the buzz over the last decade in the trucking and mainstream press around so-called nuclear post-crash verdicts in civil litigation – extremely high awards to plaintiffs injured in crashes involving commercial trucks – reached what might be an inevitable outcome in and around New Orleans in recent years, as regular readers will be well aware. Revelations continue to mount from the investigation of a ring of attorneys, medical providers and on-the-ground participants willing to put themselves in danger on the highway to purposefully collide with a tractor-trailer.
Most recently, another sentencing of one of four on-highway participants was handed down for staging an accident in June of 2017 in cahoots with an attorney. For many Overdrive readers, the exposure of a ring seemed to confirm long-held suspicions about the widespread nature of accident-related fraud.
!function(){“use strict”;window.addEventListener(“message”,(function(e){if(void 0!==e.data[“datawrapper-height”]){var t=document.querySelectorAll(“iframe”);for(var a in e.data[“datawrapper-height”])for(var r=0;r<t.length;r++){if(t[r].contentWindow===e.source)t[r].style.height=e.data["datawrapper-height"][a]+"px"}}}))}();

The goal of the crooks in the New Orleans case, however, can’t be said in that case to be any nuclear, multimillion-dollar verdict. The intense focus on high-dollar verdicts in headlines, rather, obscures a stark reality for most any trucking company, whether a one-truck independent or a large fleet: these crooks had their sights on settlements from insurers.
If you’re an independent or small fleet owner with authority, you’ve got a significant target on your back given the federally required $750K in liability insurance. The crooks on the ground know it, the criminal attorneys know it. Crooked medical providers know it, too. Further, the easy availability of data via the federal CSA program to tell most any story you want about a trucking company has led to a situation where plaintiff’s counsel will “prosecute cases that 20 years ago they might not have taken on,” said Larry Harlow, Sentry Insurance’s Trucking Claims director. Harlow’s been handling commercial auto (trucking liability insurance) claims for three decades.
[Related: CSA’s Achilles’ Heel is exposed carrier data]
“It’s easy for plaintiffs to share information with each other,” he added. Plaintiffs’ lawyers “hold seminars, they write books and papers on how to prosecute these cases. ‘Reptile theory’ is something that’s been out there for a while,” the notion that, with the right story, a lawyer can activate the so-called reptilian part of a jury’s collective brain, inspiring anger and fear to create an unfavorable opinion of the defendant – in this case that’s you, the trucking company.
In the modern age, it’s never been easier for plaintiffs’ attorneys to share information on strategies, Harlow said, “to make these cases appear larger and more glamorous than they are.”
As awards get bigger and bigger, insurance companies feel the fear themselves, leading to quicker settlements of smaller cases. In cases that feature litigation, however, reaching a settlement may not always be the cheapest way out. It’s one of many insights suggested by recent research and reporting for this three-part package examining the rash of post-crash litigation, insurance impacts and mitigation strategies.
The American Transportation Research Institute recently released the results of a new study analyzing the impact of “small” verdicts and settlements (those under $1 million, a common limit on carrier insurance policies). Researchers studied 600 cases in which either a verdict or settlement worth less than $1 million was reached. (Cases that were settled before a lawsuit was filed were not included.) 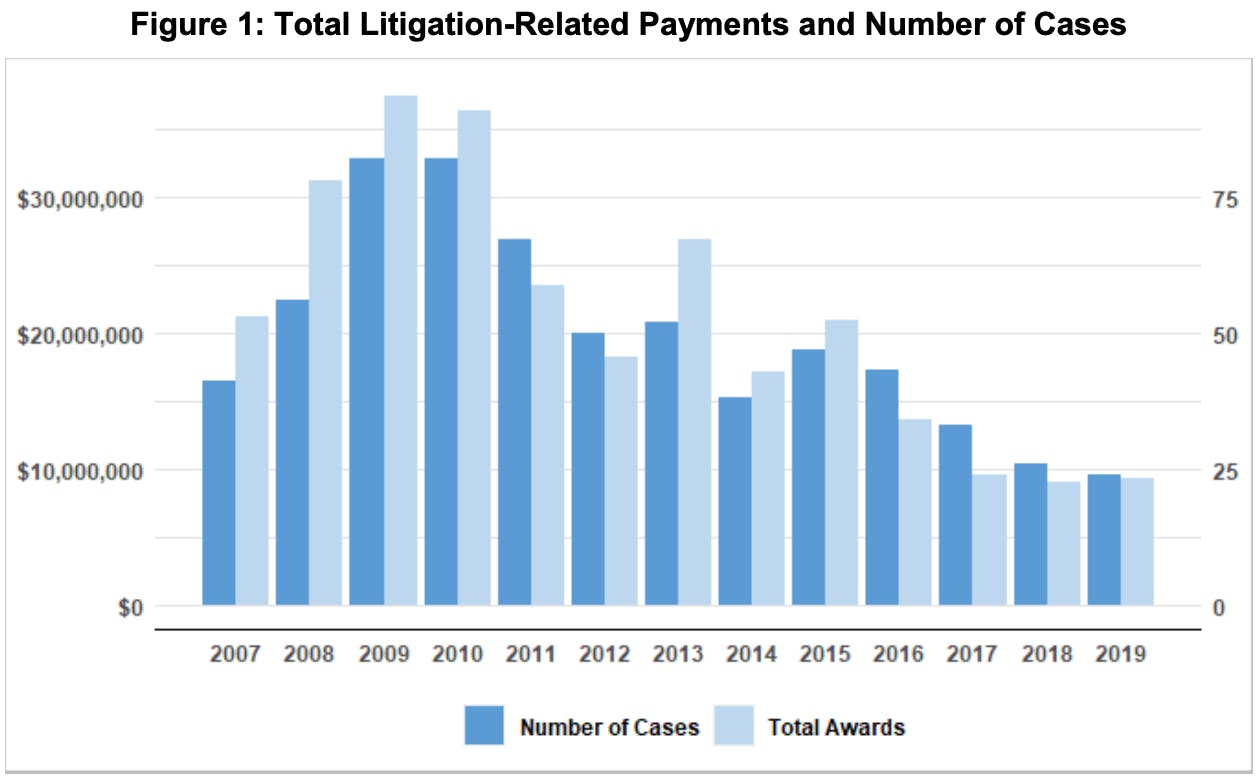 The number of cases explored in ATRI’s study is shown here with the total value of the awards in aggregate, for each year shown.ATRI

Faced with the decision of either settling a case or letting a trial play out, trucking companies, their insurers and counsel weigh a number of factors, including the state where the case will be tried, whether it will be tried in a state or federal court, the extent of any injuries incurred, the cause of the crash and more. ATRI found that just more than half of settled suits it studied had payouts higher than $500,000, while just 31.5% of verdict cases exceeded that figure. Payments between $100,000 and $500,000 represented about the same percentage of both verdicts and settlements. Conversely, the majority of cases with payments under $100,000 followed a verdict, after trial. Additionally, settlements were found to be approximately $135,000 larger than verdict awards on average.
Plaintiffs’ attorneys it seems are having success in an oft-sought goal, according to ATRI, of leveraging a settlement higher than what a jury might return in a verdict. Those attorneys will argue that the legal costs of a trial would make a verdict more costly overall. That’s sometimes the case: litigation costs (attorneys’ fees and the like) can amount to between 20% and 50% of the award amount for both plaintiffs and defendants in cases that go to trial and end with a verdict. For settlements, however, ATRI said, the cost range is more predictable — 15% to 20% of the settlement amount. “Settling may still be the more financially efficacious option in many cases,” ATRI maintained, particularly given high “variability of verdict award outcomes.” 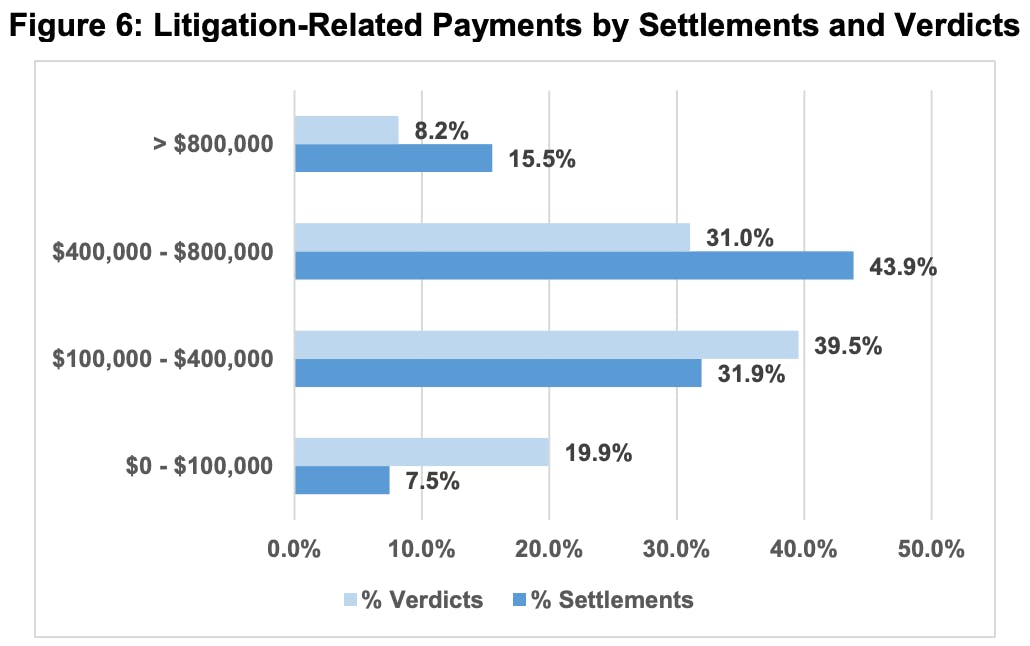 As shown here, verdicts in ATRI’s analysis were by and large less likely to result in larger payouts than settlements reached outside of trial.ATRI

ATRI also noted that fleets might pressure insurance companies to settle to avoid court-awarded punitive damages that insurance doesn’t cover.
Keep in mind, small verdicts and settlements are much more common than those much ballyhooed “nuclear” verdicts, but even the smaller settlements and verdicts are rare in comparison to crashes that are resolved through insurance claims. Subject matter experts in the insurance industry reported to ATRI that less than 2% of reported claims generate litigation action. The full study can be found here.
The story of a crash on I-35 in Texas is emblematic of the pressure on that first line of defense against civil litigation for small trucking companies and independents – their insurance companies.
Sergio Hernandez, safety director with the 60-truck, Laredo-based DialVan fleet, sees it as “the biggest problem affecting all trucking companies nowadays, especially here in Texas,” he said in a story told in part in Spring 2021 here in Overdrive.
The crash’s initiating cause was a right-rear tire blowout incurred as a passenger vehicle carrying five people was passing a DialVan rig in the left lane. The crash investigator’s narrative of the event said the rig “was traveling northbound on the right slow lane” of I-35 when “Unit 3,” an SUV according to Hernandez, blew its right rear tire and lost control, side-swiping the rig and causing minimal damage before rolling several times in the median. The “driver and three passengers were ejected from vehicle, and one passenger was pinned inside.” 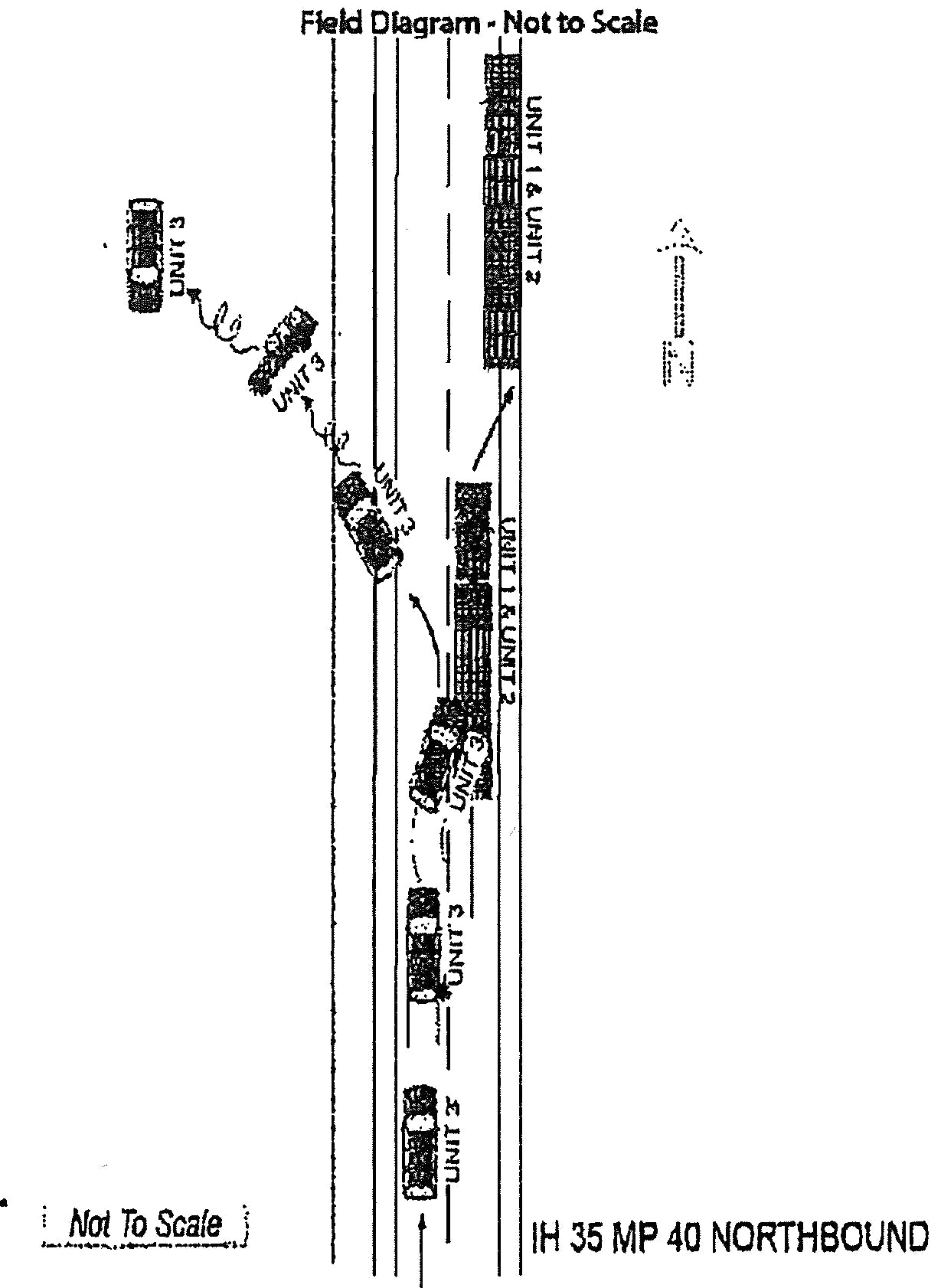 This diagram from the crash’s investigator illustrates how the collision occurred. The DialVan tractor-trailer (Units 1 and 2 in the illustration) incurred minimal damage, while the Unit 3 passenger vehicle rolled several times in the median.One of the injured, a teenager, was left a paraplegic, ultimately, and the family sued tire maker Goodyear, failing given the tire that blew was eight years old, Hernandez said. They then sued DialVan for $6 million and the affair was settled with a payout of the trucking company’s policy limit – $1 million.
DialVan was thanked for its no-fault crash at their subsequent insurance renewal with a hike in their out-of-pocket down-payment at renewal of more than 100%, from $60K to $133K, Hernandez said. Regardless of fault, the $1 million crash is on its record with the insurance company as a loss, and Hernandez expected further hikes as a result.
Lawmakers in certain parts of the country have taken note of the litigation problems trucking’s facing and have begun to limit awards handed out in court. A bill was signed into law last summer by the Texas legislature that adds a layer of protection for motor carriers in post-crash litigation.
The law, which took effect September 1, 2021, requires a jury to find a trucking company or truck driver liable for a crash before exemplary damages can be sought in a civil case. It allows a defendant trucking company to request a two-phase trial in which the first phase would be used to determine liability for the crash itself and the amount of compensatory damages awarded. The second phase would be used to determine any negligence from the motor carrier, such as driver training or equipment problems, and the amount of exemplary or punitive damages awarded.
Texas Trucking Association President and CEO John D. Esparza said the law also includes provisions “that allow for easier introduction of favorable photographic and video evidence, which has routinely been deemed inadmissible by some courts.”
Esparza said last summer that the new law will still protect the rights of Texans and all Americans traveling through Texas who may be involved in a crash with a commercial vehicle, “but at the same time reduce opportunities for some of these trial lawyers to manipulate evidence at trial in which they’ve been seeking millions and millions in damages in cases where the commercial vehicle owner was not at fault and where the plaintiff in many cases was not even injured.”
Esparza noted that the real benefits of the new law won’t be seen until cases filed after Sept. 1 start going to trial. Yet there was an obvious significant impact seen just before the law took effect: “A very noticeable increase in the number of cases filed against commercial motor carriers in the last few weeks before Sept. 1,” Esparza said. “Apparently, plaintiffs’ attorneys also feel that the new law will level the playing field and wanted to get suits on file before Sept. 1 so the new law will not apply to those cases.”
At the federal level, a bill was introduced in December taking aim at staged accidents. Introduced by Rep. Henry Cuellar (D-Texas) and Rep. Garret Graves (R-Louisiana), the Highway Accident Fairness Act of 2021 would, if passed, make staging accidents with commercial vehicles a federal crime punishable by up to 20 years in prison, or by a minimum of 20 years in prison if a staged crash results in “serious bodily injury or death to another person,” the bill reads.
The bill would also provide jurisdiction to federal courts in civil cases alleging injury or loss of life in crashes involving commercial vehicles in which more than $5 million in damages are sought and the plaintiff and defendant are from different states. The nominally bipartisan bill has since garnered no further cosponsors between the initial reps. The American Trucking Associations felt it could “curb rampant lawsuit abuse” following truck-involved crashes, where “staged accidents, third-party litigation financing and disproportionate nuclear verdicts are perverting civil justice into a profit center.”
While truck owners wait for reforms like those to play out, there’s plenty you can do to mitigate such events reaching deep into your own business. For future mitigation after the crash described above, DialVan turned to dashcams in all of its trucks. In a matter of mere months, Hernandez felt the company had already managed to protect themselves from more than one fraudulent claim already. “I really believe every motor carrier should own them to prevent these cases, that are now common, from happening to them,” he said.