1. Make labels in museums accessible for all.

The Guggenheim’s way of designing wall labels is typical. “The signs next to paintings in almost every museum are so tiny,” Jean Ryan says. “Why? We have to go right up to them to read them instead of being able to see them at a distance. It doesn’t take away from the artwork itself to have large print signs with high contrast.”
For wheelchair-users, Ryan says, it would make sense to add labels on display cases rather than just in them. “Often the labels in cases aren’t at the right angle for us to see what they say, or we can’t even see that they are there.”
For the visually-impaired, Ryan suggests a channel in the audio guides that would have the facts that are on the wall labels and also include a simple description of the artwork.
Attorney General Eliot Spitzer announced earlier this month a deal with eight national theater chains to make it easier for visually and hearing impaired people to enjoy movies. The plan is to have cooperating theaters provide headsets to the visually-impaired that offer descriptions of the visuals of the film as it progresses (in-between the dialogue.) For the hearing-impaired, the theaters will have available assistive listening devices that are compatible with hearing aids, and will also offer “rear-window captioning” for the hearing-impaired â€“ a technology that allows the hearing-impaired to see subtitles that appear to be on the screen, while the rest of the audience does not see them.
But both the headsets and the rear-window captioning devices will reportedly be available in only 38 theaters throughout the entire state; another 140 theaters will offer hearing aid-compatible assistive listening devices â€“ or, in other words, the total number of theaters with this improved accessibility throughout New York State is fewer than half the number of screens in Manhattan alone.
Currently, a total of just five movie theaters in the entire New York City metropolitan area offer captioned or narrated movies.
It seems bizarre, if not insulting, to develop such a Rube_Goldberg device as rear-window captioning, the expense of which is apparently keeping them from more theaters, when movie theaters could simply run all their English-language movies (as they currently do their foreign-language movies) with English subtitles. It is difficult to imagine people complaining about this, at least not for long. Those who do not want to read the captions will get used to ignoring them. Far more than just the hearing-impaired patrons would surely appreciate them.
If commercial movie theaters come up with some excuse not to do this, there is absolutely no excuse for the various “movies in the park” festivals, since they can simply flip on the closed-captioning on their DVD player projectors.
Federal law requires theaters be accessible to people in wheelchairs. “The Department of Justice made some Broadway theaters improve accessibility last year,” Jean Ryan says. These theaters “have accessible bathrooms on the main floor and they all have some sort of seating for people with mobility disabilities.”
But what the theaters also offer too often, advocates say, is back-of-the-bus attitude. “Most Broadway theaters have wheelchair seating in the back row or on the extreme side and if you have a vision impairment, you can’t see well from there. Even if you don’t have a vision impairment, no one wants to sit in the last row or on the extreme side. I can’t see anyone’s faces from far-away seats.
“In some theaters, the only place for us to go is behind a pillar or a wall.”
“Wheelchair accessibility in museum stores is a big problem,” Ryan says. “There is a lot of merchandise on the floor and the aisles are too narrow or there is no turnaround.” She names names â€“ the gift shops of the Folk Art museum, the Brooklyn Botanical Gardens, the Brooklyn Museum and, perhaps most ironically, the Museum of Art and Design.
“If you talk to people from museums, they’ll tell you about the special programs they have for blind people, for example,” Ryan says. “But the everyday things — seating, signage, bathroom access, access to their stores — are neglected.
“All these things are our rights, not gifts we should have to be grateful for.” But they would make nice gifts nonetheless.
Resources 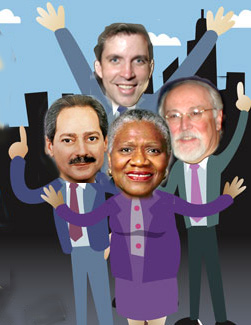 On July 28, 2005, five candidates for mayor debated issues of poverty, gentrification, education, and the proposed basketball arena in Brooklyn at a forum at Medgar Evers College. The debate was sponsored by the Community Service Society, which dubbed the event “The People’s Debate,” hoping that the candidates would address concerns related to the two million New Yorkers who live below the federal poverty level. Mayor Michael Bloomberg was invited, but did not attend. U.S. Rep. Anthony Weiner was in Washington and did not attend. Reporters from NY1, Amsterdam News, El Diario, and NY1 Noticias asked the candidates questions. The following is an edited transcript of the debate.

Question – Bob Slade, KISS FM: The Bloomberg administration says it’s improving the numbers of people of color within the New York Police Department and the Fire Department. The fraternal organizations say that that is not true. If you were elected mayor, how would you go about improving the number of blacks and Latinos on the police department and the fire department?
Thomas Ognibene: I want to see everybody that is in this city become part of the employment force, particularly the uniform services. One of the things you want to do is just encourage people to come and look at the job. Work along with police officers and fire fighters, understand and see the job, and see if that’s something that they want to do and if they want to do it, to encourage them. I don’t know what incentives other than that you can give, but I’d like to see more people from different segments of the city participate in uniform services.
Fernando Ferrer: While the mayor patted himself on the back about the diversity of the latest police academy class, he neglected to mention that the middle management of our police department – the training ground for our chiefs, superchiefs, and even commissioners – is still woefully closed. People of color are woefully underrepresented in those ranks. Let’s move to the fire department for a second. When I met with Mayor Bloomberg after his election, I showed him what happened to be the front page of the B section of the New York Times, a new class of probationary fire fighters. I said “Mr. Mayor, what’s wrong with this picture?” This picture has few if any faces of color. We’ve got to open up pathways of opportunity, not only EMS and other ways to get into the fire department, but also do more aggressive recruiting at the very grassroots of every one of our communities to make sure they have the opportunity to become a firefighter if that’s the dangerous and challenging job they want.
C. Virginia Fields: We need better recruitment, promotional opportunities, but I would also like to see a curriculum in our public schools that began to train young people to begin to move into the uniform services very early on.
Gifford Miller: Here’s what I’ve done, and what I’ll do. I’ve funded the CUNY cadet programs, which have been incredibly successful in getting people into both the police department [and, having put it back into the budget over the mayor’s objection], into the fire department. We also need more money for recruitment. And let me just note, I don’t know how we’re going to be expected to recruit thousands of police officers with a starting salary of $25,000 a year, which puts a family on food stamps. So we’re asking people to go put their lives on the line and then they’re going to be getting food stamps to go feed their family. That’s not going to happen. They ought to renegotiate that.

In the late 1960s, women began entering the New York City labor force in unprecedented numbers – just as the city began a steep economic decline. Even as the number of jobs in the city began to drop, women filled more of them. But more than 30 years later, major differences persist between men and women in the city.
Women concentrate more in sales and office work, while men predominate in construction and production jobs. In all fields, women tend to the lower paid jobs, and a wage gap between men and women remains. “Just being a woman has an important effect on your educational attainment, what job you get and how much you make,” Ester Fuchs, an adviser to Mayor Michael Bloomberg, said at a panel discussion recently.
The discussion, cosponsored by the Museum of the City of New York and Barnard College, marked the 30th anniversary of the NYC Commission on Women’s Issues. Panelists discussed the overall state of women workers in the city and focused on three disparate fields: poorly paid – and overwhelmingly female – home health aides; traditionally male – and well paid – construction jobs; and Wall Street, where many women still find obstacles to the top jobs.
Just being a woman has an important effect on your educational attainment, the jobs you seek, and even how much money you make at the end of the day, the end of the year, or the end of your lifetime.
Females in New York City comprise almost 53 percent of the over 8 million people that live in the city. Overall, the population of New York City increased about 9 percent across all races from 1990 to 2000.

Your race, your ethnicity, and your age have an impact on your earnings and your capacity for finding an occupation. All of these demographic factors — these gripping characteristics of who we are — have an impact on who we become. Is it etched in stone? Does it have to happen this way? No! But if we don’t create interventions, whether public or private, we can be sure that the patterns of the past will become the patterns of the future.
As a group, Hispanic women in the city are the youngest; 40 percent are under the age of 25. And white women are the oldest. Almost half are 45 and older.
In some groups, a higher ratio of immigrant men come here alone, and in other groups, a higher ratio of women come alone. So among Pakistani and Mexican immigrants you find 150 males to every 100 females, and among immigrants from Jamaica, Trinidad, Tobago, and the Philippines, there are fewer than 75 males for every 100 females. This has implications for who will become, over the long term, part of the American fabric.
Another interesting piece of data along those lines: Fifty-seven percent of births in New York City are to foreign-born mothers. That means the growth of our population is largely dependent upon the new immigrant women who come in here. These are the kids who are in families where there is low income, low educational attainment. If we are not focusing on these families, we are not focusing on the future of the City of New York.
Educational attainment for those over 25 years old varies greatly by race.